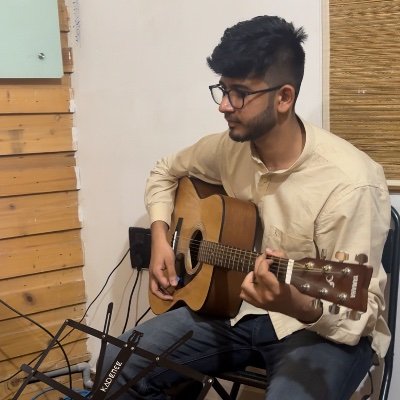 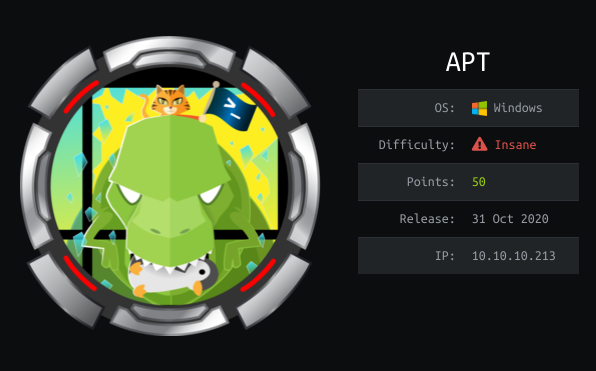 This windows box starts with us enumerating ports 80 and 135. We leak the ipv6 address of the box using IOXID resolver via Microsoft Remote Procedure Call. DCOM(Distributed Component Object Model) provides a set of interfaces for client and servers to communicate on the same computer. We use impacket to generate a RPC dump with wireshark sniffing the traffic in the background. On analyzing the network capture we find several DHCPv6 endpoints indicating there could be other network interfaces. We then scan the ipv6 interface which we got from the IOXID resolver, and find a backup of ntds.dit and the registry system file in a smb share from which we can extract hashes with help of impacket-secretsdump. We then do a password hash spray against kerberos via impacket’s Get-TGT.py and find a valid hash. Then we use kerbrute to find valid usernames. Then use remote registry to remotely read the HKLM and HKCU registry hives where we find credentials for a user on the box and get a low privilege shell via Evil-Winrm. We find that NTLMv1 authentication is enabled which is crackable, and then abuse windows defender to relay to a smb server controlled by either responder or metasploit and get a hash which we then crack to get a NTLM hash. We perform a DC-Sync to get the administrator NTLM hash and then we can login to the box as the administrator. 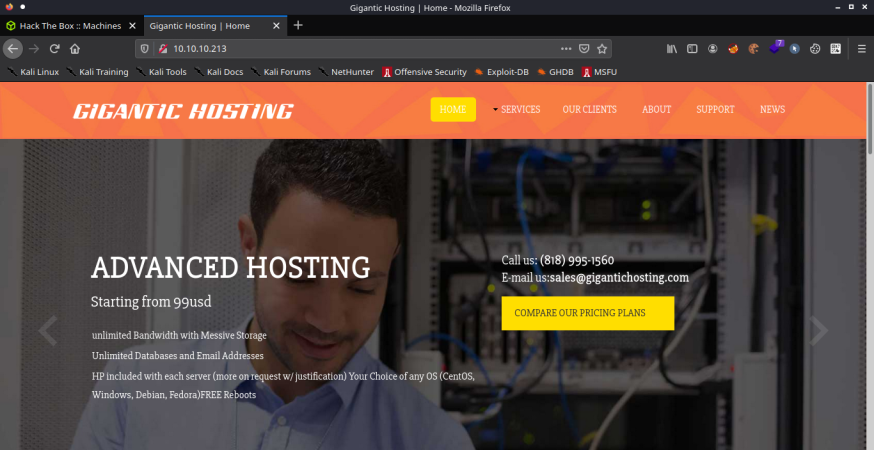 Looks like a static website nothing too interesting here, running a gobuster scan also doesn’t reveal anything useful for us.

Nothing useful for us. Although there is a comment that this website was mirrored from 10.13.38.16, but that doesn’t belong to the subnet we are pentesting against. Our scope is : 10.10.10.1/24 (Also on HTB we are solving a single machine not attacking a network so we can probably ignore it).

I can’t connect to rpc anonymously, and even null authentication doesn’t work.

We can use impacket’s rpcdump.py script, it dumps the remote RPC enpoints information and I will also run wireshark sniffing the traffic in the background so we can further investigate what this rpcdump script returns us.

Analyzing the network capture in Wireshark

Now we will look for “DCE/RPC Endpoint Mapper, Lookup”.

We find several DHCPv6 endpoints indicating there could be other network interfaces.

The IOXID resolver can be used to leak the ipv6 address and we can continue to enumerate.

Add the ipv6 address to /etc/hosts as:

The smb-os-discovery script tells us that the domain name is htb.local, adding it to our /etc/hosts file.

By looking at the ports open it looks like we are up against a domain controller.

There is a backup share let’s see if we can anonymously look at that share, smbmap and crackmapexec are not working since its an IPv6 address :’(

Let’s try to crack this zip with john the ripper.

We cracked the hash with john the ripper so the password for backup.zip is “iloveyousomuch”

We can use ntds.dit which is the active directory database and the registry system file with secretsdump.py to retrieve the hashes for all the accounts in the domain.

The ntds. dit file is a database that stores Active Directory data, including information about user objects, groups, and group membership. It includes the password hashes for all users in the domain 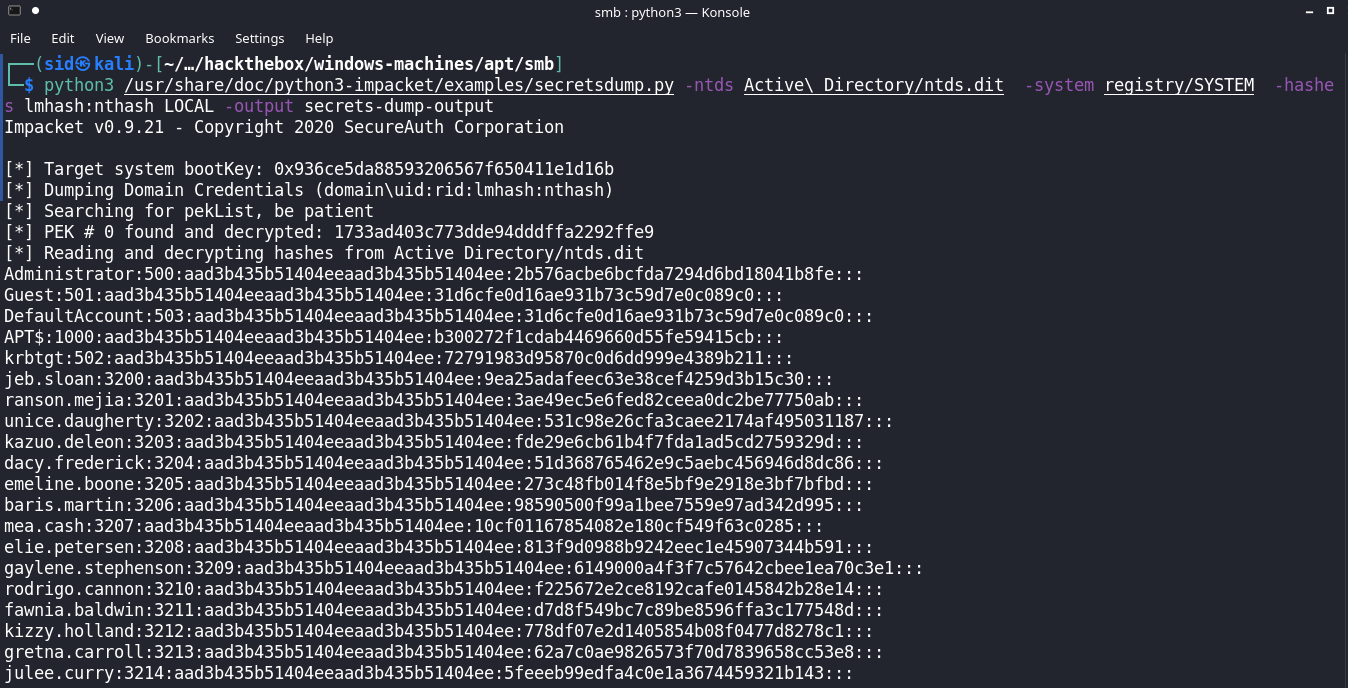 We can also try to request the TGT ticket granting ticket with the all the hashes we have against these valid users.

Here is a bash script I made to automate this process.

The correct pair of username:hash is henry.vinson:e53d87d42adaa3ca32bdb34a876cbffb , let’s login to rpcclient and enumerate more usernames.

Now we have a set of valid usernames, a correct username:hash pair, we are still unable to get on the box via Evil-Winrm Pass The Hash technique, we need to enumerate more, digging further into impacket, there is a remote registry enumeration script reg.py we can use it to read the contents in the HKLM and HKCU Registry hives. 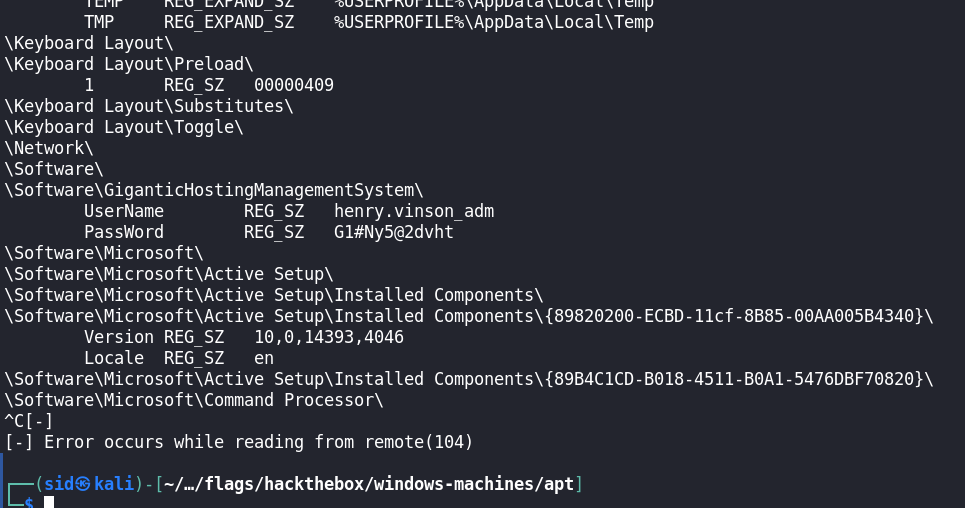 We found credentials in the HKCU regsitry hive for the user “henry.vinson_adm”. Let’s try to login via Evil-Winrm

Unable to run winpeas, can’t run nc.exe, can’t run a meterpreter exe. After enumerating the C:\Program Files folder shows us that LAPS is installed on the system and on googling LAPS exploit there are a few interesting articles but none seem to work here.

Let’s have a look at powershell console history.

According to this, the administraotr has set the Authentication Level to Level 2 which apparently means that only NTLM authentication will be made instead of NTLMv2. You can read more about this here.

We can abuse windows defender to scan a file on our smb share and relay the NTLM hash and then attempt to crack it.

Here is an amazing cheat sheet to do a NTLM hash leak, abusing windows defender to get the hash worked for me.

First we have to create a smbserver which will relay the hash and researching more about this, we will have to either use responder or metasploit to do this. I will be using responder.

And then run it with sudo on your machine.

Then we will use Windows Defender to scan a file on our smb share (which is automatically setup by responder).

To crack this hash we can use some online dedicated hash cracking services such as https://crack.sh/netntlm/

Submit the hash in the following manner: 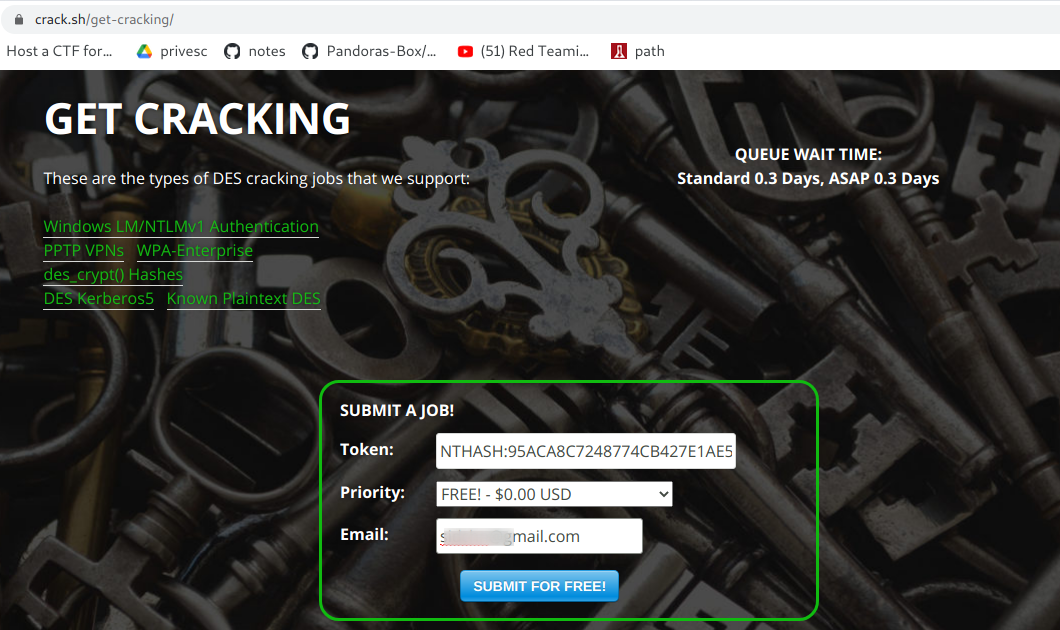 We get the mail in less than 2 minutes.

With this hash we can simply perform a DCSync attack to get the administrator’s NTLM hash and login to the box via Evil-WinRM.

Performing DCSync to get the administrator NTLM hash

Q. First of all what is a DC Sync attack?
Ans. Impacket’s secretsdump.py works in the following way:

Hey Domain Controller I am another domain controller, inorder to join the domain we need to sync passwords so send me all the hashes.This is called a DC Sync attack.

We can login as the adminstrator via Evil-WinRM pass the hash and get the flags.

And that was the box, if you have any doubts feel free to message me on my social media :D

Overview This windows box involved a lot of enumeration. It starts with us resetting an account via the poorly implemented reset password functionality on the web server.Then we are able to enum...

Overview: This windows box involves 3 Active Directory attacks AS-REP Roasting followed by Kerberoasting and finally a DC Sync to get the administrator NTLM hash. The box starts with us finding ou...

Overview: The box starts with us finding a Local File Inclusion Vulnerability on port 80 and we have tomcat running on port 8080 ,so we can use the LFI vulnerability to find credentials for tomcat...